Massage training for Guide Dogs and their owners

A few months ago I had a training session with Sue and her GuideDog Zara. She has been singing my praises and organised several of her friends to come and learn the best ways for a partially sighted person to massage their own dog. We had cleared out AchyPaw HQ to accommodate the four owners and dogs who were due to arrive and went to meet them all at the bus stop. Once we had arrived, we released the dogs from their harnesses and they immediately became happy, bouncy, excited puppies. We had dogs racing round our house and garden sniffing, chewing, playing and generally being dogs.

After a short while of this play activity, we got the dogs back and started the session with the Dot To Dot method that I had used before (borrowed from Natalie Lenton of the Canine Massage Therapy Centre) so the owners could learn to recognise what goes where on their dog. We then took the owners through 8 massage moves that they could use daily on their dogs for general relaxation, if performed slowly, or for warming-up before their free-runs, if performed more rapidly. As with Sue, the owners picked everything up in no time at all. 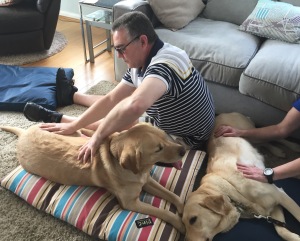 As the session went on, and their owners became more confident, the Guide Dogs became more chilled. But as soon as we had finished the routine and they knew it was all over, they reverted to play mode again emptying out our dog’s toy box, playing tug with one of Chris’s socks, throwing the draft excluders around as well as demolishing several litres of water and wee-ing in every available space in our garden (which kept our Sam and Sarah amused for hours when they returned home later that day).

We received lots of thank yous and goodbyes from all the dogs after the session. That had to be one of the best days, if not THE best day, of my new AchyPaw career. I look forward to hearing how they all get along and meeting them again.

More pictures can be found here on my blogspot.