We have held four workshops on “How to Massage Your Own Dog” @ Paws, Play & Stay in Rustington. Three have been Introductory sessions and a further one called Next Steps.

Gary, the owner of Paws, Play and Stay wrote a great testimonial for us on his Facebook page “From the owner of Paws, Play & Stay Dog Hotel : “Furthering our knowledge and benefitting our dogs is what it is all about. The difference in Milly over the last 4 months is so noticable her feel, movement and recovery all affected with positive noticeable impacts, this transfers over on all of the dogs we lay our hands on in both massage sessions and just in general bonding in daycare Paws Play & Stay. Today’s activity of warm up, cool down and further techniques has cemented the basic fundamentals and given me yet more substantial tools to benefit my dog’s health and the relationship I have with them. Most noticeably for me is the enjoyable calming effect and bonding on both myself and the dogs I interact with. The valuable tools to take care of daily the impacts on our canine friends cannot be underestimated from diet, training and interrelationship bonding to recovery from injuries and maintaining a healthy dog. I cannot thank AchyPaw & Massage by Chris enough for your time and professional approach to Canine Massage.”

Disney came in rather excitedly with his sister Skye who had been before but by the end of the session he was deeply chilled. His owner later wrote to me “Great day today and all the dogs were really well behaved! Disney is still chilling even now Les, he went out on a double walk (first with Skye then puppy Toby) and has spent the rest of the day completely zonked! I am just about to see if Toby will let me do a bedtime massage so we have a quiet night!”

Our second Introductory session was held in March and we started once more with the infamous ‘Muscle Game’. Despite considerable exchange of ideas, muscles were placed in very strange parts of the body.

Skye, the Husky Malamute, came again with another of her owners, came in, saw us, and lay down as though to say “It’s sleepy time again”. She even helped her owner with the ‘mucles game’ and then gave him a a helping leg later on when he was practising the wringing techniques (see pictures). Her owner wrote to me later saying “Skye didn’t move much all day! She was so totally chilled”. She also wrote “I gave our other dog a massage on Friday as he has been misbehaving and barking at everyone. On Saturday we had a much better behaved dog that didn’t bark at anyone! I might bring him for the follow up”.

Also in the group was a puppy Husky, Ziggy, who was very excitable at the start. But once his owner performed the rhythmic horizontal and vertical wringing move, he lay flat down with the biggest grin on his face. He even gave a great stretch which allowed his owner to really work on his muscles. We always say that not all dogs like all moves, but to keep trying as suddenly you will find the one that they love. That was clearly Ziggy’s favourite. 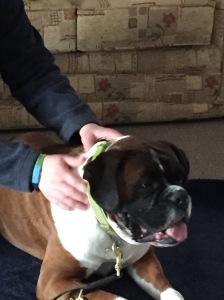 Bruno in a trance with his neck massage

This time we also had a dog with a shoulder injury, a handsome Boxer. He came in to the group slightly off kilter but at the end, after 3 hours massage, he stood up perfectly in balance. Everything was in the right place. This was a great testimonial how knowing what and how to massage can really make some huge benefits in a relatively short time.

Our first session was held in February to a full house where we received some lovely feedback :

“Canine Massage. I attended a lovely workshop yesterday run by Dr Les Ellam and hosted by Paws, Play and Stay in Rustington. I thoroughly enjoyed learning eight different massage techniques and Brandie responded well to helping me learn what she liked and when she’d had enough of a particular move. Les explained how massage can support dogs in many ways including behaviour, fear and relaxation as well as the physical benefits and also how it can improve the bond between dogs and owners. I liked that Les made it clear that we need to observe our dogs to take our cues from them as to whether to massage, when to stop and when our dogs are preferring certain moves.”

“Thank you so much for yesterday. Brandie really benefitted from the workshop, she was very sleepy for the rest of the day and was snoring her head off from the minute we got back in the door for several hours, she woke up for her dinner and then slept solidly for the rest of the evening.”

“Listening to our dogs needs and observing their behaviours. I had planned at least 48 hours of duvet time for Brandie after her Canine Massage workshop with Les Ellam from Achy Paws on Saturday. Observing Brandies behaviour, energy levels and coat, she had more energy and looked ‘lighter’ in herself. I offered Brandie an opportunity to go for a walk and she appeared keen but not over excited. Brandie is a dog that tends to take life rather seriously. We had a short drive and she enjoyed a wonderful short walk in the sunshine. She made thorough use of her wonderful nose, checking out the scent of Deer, Rabbit and Fox and interestingly, chose to walk up and down very small undulations where she had the option of walking on a flat surface. Dogs have an innate ability to self heal and I suspect she was using the terrain to use certain muscles and get some subtle stretches of her back and muscles. It was interesting to observe. We pottered back to the car and when home she slept solidly for hours. This morning her coat is looking shinier and there is very little shedding. Which is just as well as she’s enjoying her duvet time under my duvet!”

“Thank you for such an informative and fun session. I learnt so much and will certainly put it all into practice. Gracie certainly enjoyed it, especially the cheese! Gracie is certainly one in a million and she settled into it so quickly, was a pleasure to see her enjoying it. Thanks again!”

“Thank you for the massage course yesterday, We all enjoyed it, Skye and I certainly did! She keeps coming over to me to ask for more. I look forward to your next course, I might try our other dog next time!”