Back in June I was asked if I could go and help a newly rescued German Shepherd called Mr Khan who was ‘walking on his heels’. He also had EPI and probably malnurishment as he weighed so little before being rescued by the wonderful Melanie Beck of Zennet Rescue. His tail had also been removed before rescue.

When I first saw him it took my breath away how such a magnificent dog could have been so mistreated. He really was walking on his hocks – not just flat toed but totally flat footed placing his weight from his heel to his toes. This had caused his lower hind legs to become calloused. 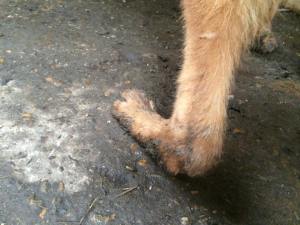 Walking on his heels

Without a tail to balance him and with very little muscle mass to support his weight, he was just dragging himself along which had resulted in a very bad roaching of the spine.

But, my goodness, Mr Khan had a real will to survive. He wanted to get better.

My aim that day was to teach Mel all the moves and routines she could do to help him recover his mobility and to stand up straight. Lots of massage techniques, lots of compression to build up the muscles and plenty of passive stretches as well as active exercises. We spent quite a long time together as Mr Khan deserved a second chance (or probably a first chance) at a good life.

He seemed to know that I was there to help and was very responsive to touch and massage. If there was any discomfort he displayed it by a gentle grabbing of my hand as though he were saying “OK Dr Les….that is a bit tender there”

There was actually very little of Mr Khan that wasn’t tight especially his tendons and ligaments of his hind leg which had shortened and prevented him from stretching them fully and standing up straighter.

For a dog who had clearly not had the best of starts he was very tactile and we soon got lots of sighs and snores. He seemed to realise that massage therapy and myotherapy was going to restore his quality of life. Unfortunately it was harder trying to coax him to perform active exercises as his EPI prevented the use of treats so we had to devise exercises that didn’t need bribes. But he picked those up quickly.  Again, he seemed to understand that we were trying to help.

Now, just over three months later Mr Khan is back to the Magnificent Mr Khan that he should be. Mel describes him as “a 50kg hunk of love” who has become a real massage diva.

I know that it couldn’t have been an easy journey for him and Mel must have been massaging him every day to bring about this transformation.

Look at these ‘before’ and ‘after’ pictures and see how massage, myotherapy and some good honest hard work can bring back the quality of life to a smashing dog. 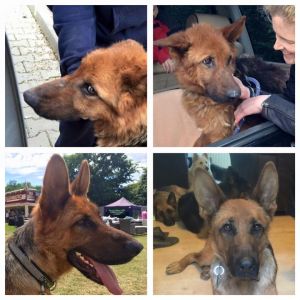 And we love happy endings. The latest on Mr Khan the Magnificent is that yesterday he won Best in Show at the Helping Paws Fun Dog Show. Mel, who rescued him, posted “OMG, OMG, OMG!!!! Mr Khan has only gone and won Best in Show at the Helping Paws charity dog show!!! So, so thrilled and proud of this boy after everything he has been through. Team Khan, thank you!! ” These pictures show a totally transformed dog physically and mentally. He was happy, alert and totally strutting his stuff.

Mr Khan and his proud owners

The Best in Show 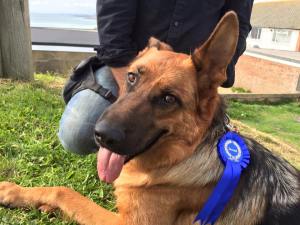 What a happy dog he is now