Throughout 2016 we ran 5 sessions of the popular Foundation in Canine Massage workshops at Paws, Play & Stay, Rustington for 2016.

Session Five : November 12th brought another set of dogs with stories. We had Kayli the 11year old Border Collie with arthritis and epilepsy. She is currently adding chiropractic therapy to the mix and Mum wanted to complement that with a massage routine she could perform daily. Kayli will also benefit from the passive strteches we covered as well as the fun exercise routine to stretch out her back.

Oscar was brilliant. Chilled is not enough to sum him up. But his start in life was anything but chilled. He is a Spanish rescue dog who spent 4 years in a rescue centre with 500 other dogs, most of the spent time in a cage. He has been with his Dad for 6 months now Lucky Oscar’s Dad felt that learning how to massage him would be another way to help Oscar with his new life. Oscar decided that Dad is even more lovely than he was at the start at the workshop.

Little Bracken with the wonderful ears, is a 6 year rescue with luxating patella and left shoulder arthritis. The skin rolling and wringing techniques were a real hit with him.

Ziva the German Shepherd puppy has undiagnosed issues with her left front paw and elbow. The vet hopes that these issues will ease as she grows but Carol and Matthew thought that bringing him along now would help them as he gets older. 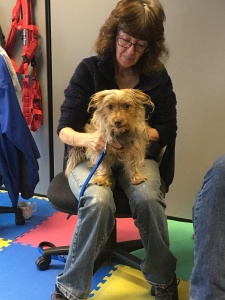 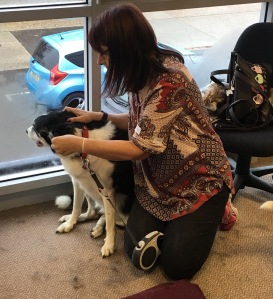 Kayli having an ear massage

Oscar enjoying his back massage

Session Four : April 23rd was an advanced workshop. I call this one “Next Steps, Sporting activites & Warm-Up / Cool-down routines” which is quite a long title but covers another 8 massage techniques including some sports massage, discussion what to do with a sporting dog or well dog, warming up and cooling down, lymphatic drainage AND some more passive movements and active exercises. I think that lot deserves a long title.

Misty and Shadow the Huskies returned as did the amazing posing Milton. We also had the tiny Florence miniature poodle who came on an Introductory workshop we ran last year.

After a run-though and revision of the moves they learned previously we started on the additional routines. Even little Florence was impressed with the warm-up and cool-down which shows you are never too small to be properly prepared. OK, she may not be jumping over hurdles or running through tunnels but she is an active little girl who will benefit from warm-ups before activity just as much as the athletic Milton.

When we performed the new active stretch which normally needs two people, Florence’s mum managed it single handedly. It’s always encouraging when owners can think of ways to adapt a move to suit their own dog which we call Next Steps. This gives the owners a further 10 massage techniques to add to their toolbox and also covers warm-up and cool-down routines but advice for those with agility and working dogs. 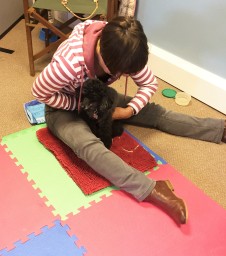 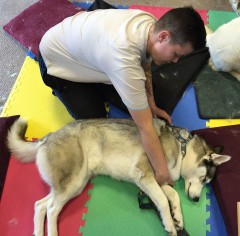 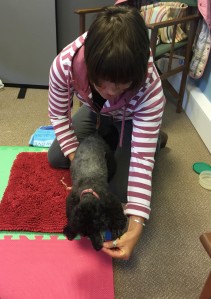 Even Little Florence shows how to perform an active stretch 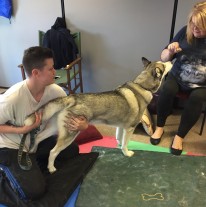 Shadow showing how to perform a perfect active stretch

Session Three : April 16th was yet another full house. Everyone who came along had a story.

Callie and Kara work at Canine Partners, a charity that assists disabled people to enjoy greater independence and a better quality of life through the help of specially trained dogs They look after the working dogs during training and sometimes find they can be bit anxious at time and also need some help relaxing at the end of a day working. What better thing to learn than how to give them a good relaxing massage? They brought along Chilli, a Miniature Wire Haired Daschund and ex working dog Radley, a Golden Retriever who stole all our hearts with his laid back attitude.

Maggie and Rachel brought along two Huskies, Misty and Shadow. Misty is an epilepic so Maggie wanted to learn how massage could help with pre- and post-seizures. Luckily I’ve written a couple of articles about massage and epilepsy in dogs so was able to offer a lot of advice.

Jo came along with Milton, a Hungarian Vizsla agility dog in tip top condition who knew he was extraordinarily handsome and everytime the camera was pointed at him stopped whatever he was doing and posed!

Rosemary came along with the lovely senior Mika, a Westie. She works for the Westie Rescue Scheme and wanted to know how massage could help all the dogs she looks after.

As always, the class started off with eight dogs eyeing each other up but by the end of the workshop you’d have thought they’d been best buddies forever.

Session Two : January 23rd was another full house. Many thanks to Molly and Chewey the puppy Springer; Matt and Pepper the Tibetan Terrier; Sarah and the adorable Teal; Nancy, Jo and Roxi who worked on Bodhi, Leo and Millie; and Dean who came with the lovely Betty whose brother Archie attended last week (and clearly told his sister how great massage is.

Session One : January 16th was a full house with dogs of all sizes from a Miniature Yorkshire Terrier to a father and son Irish Setter for this first Foundation in Canine Massage workshop of 2016.

Many thanks to Sue and Scrumpy the Sussex Spaniel, Sarah and Coco the Shih Tzu / Poodle, Rhia, Alice and Tyler and Albert (two of the most loveable Irish Setters you could hope to meet), Alice and Custard the Cocker Spaniel, Emma and Bailey the Cocker Spaniel and not forgetting Tina with tiny Archie the Miniature Yorkshire Terrier.

At the start of the session the dogs were looking at each other warily and guarding their space making a rather large circle. But it was encouraging to see that, as the time went on, the circle shrunk until at the end of the workshop all the dogs were behaving like they were best friends and had always been that way.

Even the puppies and anxious dogs settled down as their Mums became more experienced with giving them massage therapy. As shown in the photos, some of the dogs decided that, after the workshop, the best place to lie was upside down with goofy grins knowing that this was now going to be their treat forever.