Avascular Necrosis in dogs and the benefits of adding Complementary Therapy

In June of this year, I was invited over to help Sonny. He was then not even a year old but diagnosed with bilateral Avascular Necrosis affecting both hip joints. The vet decided the best plan for his recovery was Femoral head & neck excision. While this condition is common-ish in young dogs, to be affected with both legs at the same time is rarer.

It meant that little Sonny could not enjoy being a puppy. He has only known wobbly gaits and compensation for his weak hind legs. The vets operated on one leg in May with the other hip booked in for 6 weeks later.

His Mum wrote “It is very important that the muscle and scar tissue around these joints is built up to ensure as good a mobility as possible. Is this something you can help with?” She is already a Reiki practitioner and wanted to combine physical therapy with energy healing to give Sonny as much help as possible. He was also on anti-inflammatory medication.

When I first visited him, he was walking with his hind legs closer together but was not showing any signs of gait discomfort placing both legs down equally. I guess he had never known anything different so was doing the dog thing of “Getting On With It”

The session was more aimed at training for his Mum to build up the muscles of the leg that had been operated on to help support him for the operation on the other leg. Literally, to give him a leg to stand on!

I often get asked what a fit muscle should look and feel like. I use the analogy of a chicken fillet. A high-quality chicken fillet. A Waitrose or Marks & Spencer’s chicken fillet (although other supermarkets are available). The affected thigh muscles of Sonny looked more like a ham slice or lower quality fillet. They needed considerable building up.

He had other compensatory issues, including tight neck and overused shoulder muscles.

I devised a massage routine plus physiotherapy exercises for his Mum to perform daily.

I recently had an email saying “I just thought you’d like an update on Sonny. The massage techniques and exercises you taught me were so helpful in his recovery. He went on to have the second surgery carried out in July from which he has recovered equally well using massage and exercise. He hasn’t needed any further intervention and his Lidl chicken fillets as you called them are now looking like Tesco Finest!! We’ve just returned from a break on the Isle of Wight where he ran freely on the beach for hours on end. So a big thank you to you from us!!” 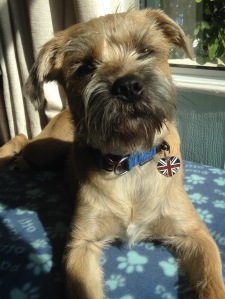 I asked if it was OK to share this story and his Mum said “It can be very worrying for people who find their dog needs this operation, but it is generally very successful and Sonny is living proof!! If his story can help other owners that would be wonderful.”

She also sent some photos of Sonny post-operation and allowed me to share his before and after X-rays. Look at the way the femoral head was not fitting in the socket in the ‘before’ picture on the left and how the head was excised in the ‘after’ picture. Here are all the pictures – shared.

Poor old Sonny had spent his puppy days with those ill-fitting joints. Physical therapy, massage, exercise, Reiki and medication all working to allow Sonny to run like the puppy he should be on the beach in the Isle of Wight. What a great transformation and testament to the power of complementary therapy.