Listen to Your Dog 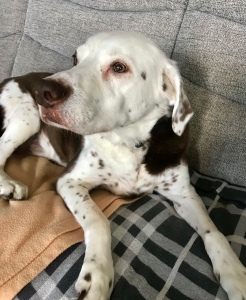 Jack’s Mum calls him Magical Jack (well, that’s one of the names he is known by) but I think he should be Lucky Jack.

I first visited Jack in November last year when his Mum gave me a list of the supplements and food he is on. Each is carefully researched with the other leading to a tailored balanced food intake – things like golden paste, ground egg shell, bone broth, fresh fruit, veg and meat. Jack is very well looked after naturally but he is also on pharmaceuticals to take care of any underlying discomfort.

After the first session with me, his Mum, Sue, took on board everything we did. Jack is an ‘as and when’ boy regarding his manual therapy. He has a session as he needs it and when he asks for it. He is still reluctant to offer his rear end for therapy but with careful muscle melting, Sue is able to work just where he needs it. Sometimes she has to start a session with general stroking which can then lead to more intentional massage – which is exactly what we have to do occasionally.

6 months along in his therapy programme and Jack is now stretching more, especially with his rear end. He is still a plodder but he is a happy plodder. His exercise regime is controlled by him. His Mum said that they typically have about 30 minutes outdoors walking a day but that “varies by how stiff he is. If he is stiff, we mess about indoors”. Such a sensible attitude to listen to your dog.

Knowing that his outdoors exercise might become shorter, Sue is bringing the outdoors in. She has planted a sensory garden for him. Lots of herbs and flowers with strong smells so he can go outside and sniff and explore to his heart’s content. He can still have his sensory enrichment without having to walk round the parks and streets to catch up on his pee mail.

With his nutrition and medicinal needs carefully controlled, his exercise needs listened to, his sensory needs now growing in the back garden plus his ‘as and when’ manual therapy, Magical Jack is really a Lucky Jack.