Vet Eili Dettmering has been visiting our Sarah for the past couple of years to give her Aculaser therapy for her arthritis and other issues. 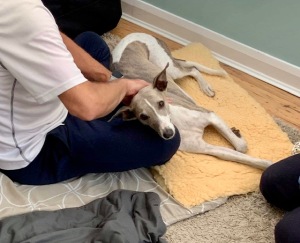 Recently, the arthritis in Mr Sam’s left shoulder has started to cause a few dips in the morning so she has been started therapy with him. Naturally, this put Sarah’s nose right out of joint as she believed that Auntie Eili was hers and not to be shared. Meanwhile Sam thinks these are the best Friday evening presents he’s ever had…Auntie Eili, therapy AND treats.

But an even bigger way to put both noses out of joint, is for their Auntie Eili to then bring in her own two dogs for Dads to work with. Oh-so much whining noises for an hour. Sam and Sarah were not going to let us forget they were there first and were not to be ignored. 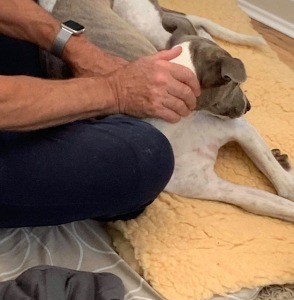 We’ve been seeing Benny and Louie every now and again to help with their own issues. Their Mum first described Benny as ‘fast and bendy’ – he needs less work than his brother. Louie is the agility boy and is far more suspicious at first. He’d recently tightened up in his front muscles and mid back which needed some manual therapy to ease them.

The best way to work with Louie is to not work on the issue straight away – that works with his anxiety. His mid back was quite reactive at first. But by concentrating on his shoulders and neck, the fascia started to relax and stretch, allowing me to start gentle work on his stiff back. Fascial work is quite amazing – you can work on one part of the body, but see another part visibly start to ease. Which is what Louie’s back did. 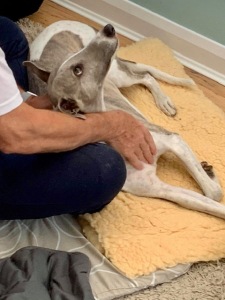 You can clearly see the progression in these 3 photos. The first was Louie going “Ok…..not sure but keep going”. The second was more “Ah…the neck is easing so I can relax”. The third was “THAT’S the spot…thank you”.